The world is ageing. By 2050 globally there will be more over 60’s than there under 14’s. With that shift come real changes for the Churches that they are only just beginning to consider.  No wonder then a week ago the Christian relief and development agency Tearfund published my major study into the needs of older people in Rwanda. Not surprising then that just after the Dicastery for the Laity, Family and Life in the Vatican staged its first ever Congress on the Pastoral Care of the Elderly to explore what challenges the future might hold. 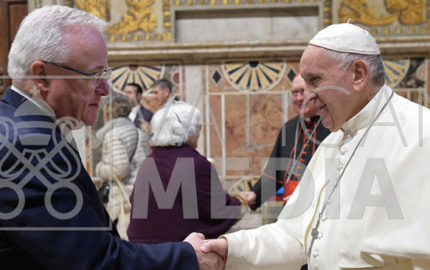 In Rome, Cardinal Farrell gave a thoughtful opening address setting out a new pastoral reality. And delegates heard from the President of Focolare on bridging generational divides, from Franciscans caring for the elderly in Angola’s localities to Brazilians who had pioneered new approaches to parish support. The Holy Father himself joined to address the final session – a role model for active ageing if ever there was one.  Their combined words echoed concerns of the Tearfund report, not least those of the CEO, Nigel Harris, who observed that some gaps make for ‘uncomfortable reading’  but all the same should be welcomed for the opportunities they offer to improve responses over time.

What fresh issues are still on the agenda and what pressing new challenges might the church(es) need to think about?

A big tendency, of course, in teasing out fresh needs is to take personal experience and extrapolate from it universal principles. This approach however can distract from attentive listening and the intense variety that can exist even between regions of the same country:  in G7 countries, including the UK, some older people are benefitting from good pension provision over the last half century, from improving health, peace, and rising property prices to enter retirement in a position of security. The talk here can be of inter-generational tensions. By contrast in a country such as Rwanda pension coverage runs at less than 9 per cent of the country, social protection schemes for the vulnerable elderly are fragile because of the scale of human needs. The young are moving from villages to the city to find jobs. Moreover, there is evidence that, because of the legacies of genocide and regional conflict, over 65’s are disproportionately likely to be living with trauma, ‘biographical pain’ and unsupported conditions such as high blood pressure, poor eyesight and pain from badly healed broken bones. Meanwhile, in South Africa, reports of elder abuse are up with threats of physical pain being joined with financial abuse which itself has not been unknown in the UK, USA and Asia.

…in Italy whole multi-generational care villages have been built as a sign of partnership between church and state in response: this is a great way to improve the wellbeing of young and old alike.

Nevertheless, the talk of churches is so often about the ‘young’. ‘Child protection’ is the focus of safeguarding so missing at risk adults, youth groups are ‘the future’ for investment sidestepping the age shifts of communities, and seminarians and young pastors beginning their working life prioritised for investment over retired clergy who often struggle when they reach 75. Worse still, even the church (and it happened at times at the Congress last week) accidentally defines ‘old age’ as a passive moment constructed by exit from the workplace rather than a phase of life where grandparenting, learning, volunteering, and active participation can be encouraged in every ministry.

Governments make the same mistake. The Commonwealth is ageing at speed, but when its heads of government visit Kigali in June they will focus only on ‘the youth’.

What does preaching sound like when it speaks to the opportunities of old age in diverse contexts? How could catechesis be adapted to walk with families across the ageing process? What active groups do parishes and Dioceses sustain that celebrate the intrinsic worth of those at every stage of life. And, as the economy changes, in both a regional and global context to reflect the new ‘greying’ of our humanity? How will formal and informal Catholic social thought and action (and better public policy making) respond to those shifts? Believing life to be tough the World Health Organisation defines old age in Africa at 50 while the UN marks its start at 65. Priests get to retire at 75 and Popes later. In some languages old age marks entry into wisdom and eminence while in other cultures its leaves people feeling, as one man told me ‘like sugarcane…chewed up and spat out and discarded on the roadside’.

There are signs of hope. In Southampton thirty years ago, I established Catholic City Centre Care. It comprised volunteer delivery of 150 meals on wheels cooked each Sunday in the parish kitchen for the city’s most isolated elders with referrals coming from social services. It still includes a team of part-time paid support workers who visit those struggling at home. The growth in these activities of care was so great that we became among the first parishes in the UK to introduce all day long perpetual adoration so that those who wanted to be active in other ways could contribute to the spirit of the work as well.  This initiative spilled into international solidarity when we then went on to mobilise hundreds of schools, mosques, synagogues, businesses local newspapers and TV and people of good will to raise hundreds of thousands of pounds for elderly refugees and young rape victims during the Bosnian wars of independence.  In Horsham, West Sussex, there is pioneering work being done to support grandparents and in Italy whole multi-generational care villages have been built as a sign of partnership between church and state in response: this is a great way to improve the wellbeing of young and old alike. In Rwanda the churches reach millions in the poorest neighbourhoods and so have access to turn that ingenuity into a special ability to empower the elders in contexts where so many report cherishing their faith but being taken for granted.

These are first steps; they are unsteady steps: but they are positive steps. In Rwanda and Rome, at Tearfund HQ and in the Commonwealth Secretariat it is encouraging that the conversation can now begin in earnest. Congresses and reports though will only go so far though. Concrete action, resources and a re-imagination of who we really cherish at the heart of all we do are the next requirement: the world is ageing and there is no going back on that fact.

Francis Davis is Visiting Professor in Social Justice at St Mary’s and Professorial Fellow in the Institute of Ageing Population at the University of Oxford. He tweets at @FrancisTDavis

The summary and full report of Ageing in Rwanda: Challenges and Opportunities for Church, State and Nation can be accessed here https://reliefweb.int/report/rwanda/ageing-rwanda-challenges-and-opportunities-church-state-and-nation