While the understanding of Catholic social thought as a structured and articulated body of thought is relatively recent, its roots go back much further. The work of St. Thomas Aquinas is certainly pivotal in this regard (and merits its own analysis), but in several matters the first consistent reflection on applied global economic and social issues from a Catholic perspective ought to be credited to the late scholastics and particularly to the so-called School of Salamanca. 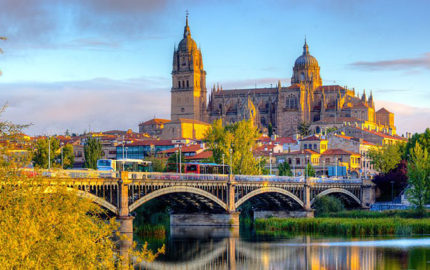 Its founder, Dominican Francisco de Vitoria, studied in Paris where he developed a Thomist line of reasoning, combining Aristotelian foundations with a strong emphasis on the concept of natural law and the exploration of its implications. In 1526, Vitoria returned to Spain to take over the prime chair of theology at the University of Salamanca. The expression can be misleading since authors associated with the School worked in many different places in the Spain, Portugal and around the world. In Spain, Alcala de Henares was also a key intellectual hub as were the Portuguese Universities of Coimbra and Évora at the time. Nevertheless, the reference to Salamanca is justified by the association of the founder of the School – Francisco de Vitoria – to the University as well as by its prominence in this period.

The School of Salamanca included a distinct group of Iberian late scholastics of the sixteenth and seventeenth centuries that in most cases applied a Thomistic frame of reasoning to deal with the new problems arising out of the European expansion into the “New World”. In doing so, they significantly expanded the pre-existing understanding of many important issues, ranging from business ethics and economic theory to politics and international law.

The rapid growth of commercial and financial activity in this period coupled with the new problems related to international relations, the rights of indigenous populations and other new global interactions led to the need to address new problems from a Catholic perspective. The serious theological, political and cultural challenges posed by Protestantism further reinforced this need and so ethical reflection and discourse on a wide variety of applied subjects was a primary concern for the Iberian late scholastics.

The competition between different religious orders in association with the external demand for professionals fostered an active academic environment that also contributed to the intellectual productivity of the late scholastics.

The intellectual importance of the School of Salamanca also corresponded historically with a period in which several favourable demographic, economic, cultural, and political circumstances turned the Iberian Peninsula into a focal point not only for commerce and diplomacy but also for intellectual exchange. The interaction between Christian, Jewish, and Muslim elements in the Iberian Peninsula was an important factor, as was the development of the printing press, allowing the mass production of literary material.

The expansion of bureaucratic structures that accompanied the expansion into the “New World” also generated the need for increased training of both civil and military personnel to occupy the new positions. Thousands of people were hired to perform new administrative, managerial, and judicial roles and Iberian Universities faced a rapidly increasing demand to train these professionals. The competition between different religious orders in association with the external demand for professionals fostered an active academic environment that also contributed to the intellectual productivity of the late scholastics.

All these circumstances led to the development of the school which we now call the late scholastics – and particularly those that constituted the School of Salamanca – to be in a position of having to apply long-standing pillars of Catholic thought to the new challenges presented by the first process of (limited) globalisation experienced in their time.

In a period where Catholic social thought faces a similar challenge of dealing with new problems in the context of contemporary globalisation it is worth revisiting the main contributions of the late scholastics and assessing what we can learn from them in terms of our contemporary understanding of political, economic and legal realities from a Catholic perspective: this will be the subject of future posts.

Catholic teaching on usury and interest – continuity amidst change