Rapidly developing events and protests springing from the United States to much of the Western world (and elsewhere) have once again brought discussion about individual rights and equality – both in theory and in practice – to the forefront of public debate. 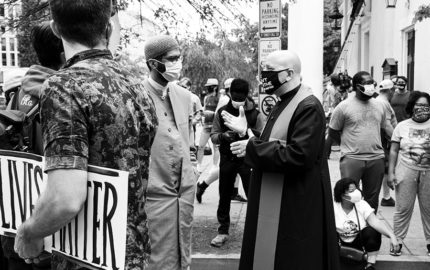 The notion that the (still incomplete) path towards the recognition of universal human rights was long and arduous will be well understood to most contemporary observers. Less obvious, however, will be the decisive role that Catholic thinkers played in the hazardous and complex journey towards the recognition of the dignity of every human person regardless of race, nationality, social class, economic standing or other qualifications. In particular, the role of the late scholastic Iberian scholars of the sixteenth and seventeenth centuries was important.

In an earlier entry I discussed the relevance of the late scholastics – and particularly of the School of Salamanca – for our understanding of globalisation. But the late scholastics also played a pivotal role in the evolution towards a universal understanding of human rights. While considering their contributions it is important to avoid being anachronistic: as all human beings, the late scholastics were men living in a specific cultural and societal context and bounded to a significant extent by the prevalent modes of thinking in their time. It would be a mistake to judge their positions through the lenses of contemporary views, rather than by the direction their contributions helped move the debate and the understanding of the issues at stake in the time in which their scholarly contribution was made.

The discussion about the role of the late scholastics in the movement towards the recognition of universal individual rights is a complex one, but it is worth highlighting a few points.

There is no hiding place in Catholic social teaching for those who wish to perpetuate discrimination on the basis of race.

Firstly, even though the earlier thought of St. Thomas Aquinas was firmly rooted in an association between the common good and objective right (rather than individual rights), the emphasis on the prevalence of universal natural law over positive law, which would be dependent on time, place and the disposition of the ruler, provided a favourable environment for laying a foundation for an affirmation and defence of individual rights. The emphasis on the importance of the natural law paved the way for increased protection for individuals in their relationship with civil authorities and from potential abuses in positive law enacted by the state. We might think of the war crimes tribunals at the end of the Second World War as being an enactment of this philosophy. The failure of the Nazi regime to protect individual rights, as demanded by natural law, did not protect many of the perpetrators from facing justice after the war in an international tribunal.

Secondly, the adaptation and expansion of the traditional Roman law concept of ius gentium by the late scholastics in order to develop a notion of international law, common to all mankind and applicable to all nations and peoples. Authors such as Vitoria, Soto and Suárez all agreed that the ius gentium was universal and could be recognized by reason even though it was not the product of the will of any human assembly or legislator.

Thirdly, the late scholastics progressively added to the traditional Thomist conception of objective right, an increased understanding of autonomy of the person linked with a distinct sphere of individual freedom. Building upon the universal character of natural law, these notions were then gradually – but not linearly – understood to extend to all mankind, which ultimately led most of the late scholastics to, for example, oppose forced conversions of the peoples of the New World, stressing the need to employ peaceful means of conversion.

Reflecting upon this long path and the contributions of the late scholastics one gains a better appreciation for the foundations, significance and reach of the teachings of the Catechism of the Catholic Church on the dignity of the human person (§1700): “The dignity of the human person is rooted in his creation in the image and likeness of God; it is fulfilled in his vocation to divine beatitude. It is essential to a human being freely to direct himself to this fulfilment.” Related to this are paragraphs 1934 and 1935 which state: “Created in the image of the one God and equally endowed with rational souls, all men have the same nature and the same origin. Redeemed by the sacrifice of Christ, all are called to participate in the same divine beatitude: all therefore enjoy an equal dignity. The equality of men rests essentially on their dignity as persons and the rights that flow from it. Every form of social or cultural discrimination in fundamental personal rights on the grounds of sex, race, colour, social conditions, language, or religion must be curbed and eradicated as incompatible with God’s design.”

There is no hiding place in Catholic social teaching for those who wish to perpetuate discrimination on the basis of race.

Photo by Koshu Kunii on Unsplash

The late scholastics and globalisation

The Church, property rights and the environment
ShareTweet
Subscribe