In this post, Philip Booth discusses how the language we use in debates can get in the way of agreement and how Catholics interested in environmental issues should study the work of Elinor Ostrom for inspiration.

In the last blogpost on this site, I wrote about the importance of private property rights for environmental conservation. But there is more to this debate. And sometimes semantics gets in the way of reaching a common understanding on these issues. My garden, for example, is private property and nobody would doubt that. However, a community of monks might care for their (possibly very large) grounds, farm, gardens, bee hives, and so on by holding it in common – though they still hold it privately in common. Indeed, property titles can be quite complex. Under English law, there will sometimes be restrictive covenants, nested leaseholder and freeholder arrangements and property held under trust (including by charities such as the National Trust) and many of these devices will be designed to ensure good outcomes when it comes to sustainability. 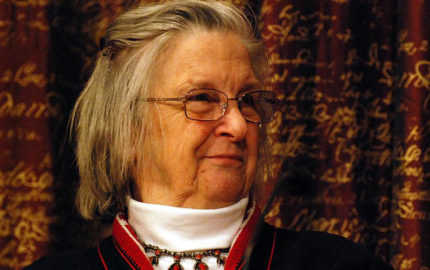 As far as I am concerned, these are different forms of private, communal ownership or several property. I would tend to define property rights as private if the answer to the following question is “no”: “is there some entity that is not the state that has the right to exclude others from certain activities on the property?”. However, not everybody shares that vocabulary. Those of a more left-leaning disposition might prefer to use terms that have a more communitarian ring to describe these arrangements. That is fine, but the more we talk about these things, the more we might find we agree!

Highly relevant to this discussion about semantics is Elinor Ostrom. She was the first female winner of the Nobel Prize in economics in 2009. She died in 2012. When she won the Nobel Prize, articles appeared in The Guardian praising her from a left-leaning perspective and in The Telegraph from a somewhat different perspective at more or less the same time. The latter was put on the reading list for the then Conservative shadow cabinet. In her last appearances in the UK before she died, Elinor Ostrom gave the Hayek lecture at the free-market Institute of Economic Affairs and, earlier on the same day, she gave a presentation to a conference of several thousand environmentalists.

Ostrom discovered that, in practice, environmental resources were often managed effectively when property rights existed in what she described as a “polycentric” order with different organisations being responsible for different aspects of governance. Privately owned land and resources, as we would understand the idea in the West, would often not lead to sustainable management; state ownership would often be a disaster.

Ostrom managed to draw together people of goodwill who had very different political perspectives in debates about the management of environmental resources. To those who support private property, her research gave amazing insights into non-state solutions to resource management. To left-leaning people she came over as a communitarian who believed that communities acting together could solve their problems without creating markets that involved buying and selling of pre-packaged property rights.

So what was her contribution? And what has it got to do with Catholic social thought?

Ostrom discovered that, in practice, environmental resources were often managed effectively when property rights existed in what she described as a “polycentric” order with different organisations being responsible for different aspects of governance. Privately owned land and resources, as we would understand the idea in the West, would often not lead to sustainable management; state ownership would often be a disaster. However, by way of an alternative to both, she found that communities, from the bottom up, often develop methods of controlling the use of environmental resources – fish and forests in particular – that are remarkably stable and effective. Communities would develop their own systems of enforcement to restrict resource use to sustainable levels. Sometimes the systems that economists recommend (such as tradable quotas in fishing rights) don’t work in practice because they cannot be monitored. However, alternatives, such as limiting the time out at sea of each boat or restricting net designs might work. The community, she argued, is often remarkably effective at developing and enforcing rules that allow the exploitation of natural resources within sustainable limits.

In this framework, the main role of various levels of government, she argued, is to support those systems and not to take them over. For example, the government might provide information on resource levels.

The links between her work and the principles of Catholic social teaching are obvious, though I do not think she can have read any Catholic social teaching at all. The principle of subsidiarity is certainly at play – resource management is left to the lowest level and the higher levels of social organisation assist the lower levels. The focus is on the individual as somebody who needs to work and use environmental resources to sustain their family. However, the individual is clearly acting within the community.

Ostrom put a lot of emphasis on the importance of trust within communities and also reciprocity – key themes of Pope Benedict’s encyclical Caritas in veritate.

Ostrom argues that in traditional economics: “external officials are expected to impose an optimal set of rules on those individuals involved. It is assumed that the momentum for change must come from outside the situation rather than from the self-reflection and creativity of those within a situation to restructure their own patterns of interaction”. By way of contrast she argued in her Nobel Prize lecture: “Extensive empirical research leads me to argue that instead [of designing institutions that force individuals to achieve better outcomes], a core goal of public policy should be to facilitate the development of institutions that bring out the best in humans.” This certainly has a strong resonance with a Catholic view of the principle of subsidiarity and integral human development which is sceptical of the idea of development being done to the community from outside.

There are two lessons from this. The first is that, following the papal encyclical Laudato si, we should study how communities, especially in poor countries, actually manage environmental resources in practice. Ostrom’s work shows the way here. The second is to do with the way language gets in the way of agreement. Elinor Ostrom was widely admired by almost everybody (and mis-represented by nobody) because she was able to express herself in a language that resonated with all people of goodwill.