This post is reproduced by kind permission of the Catholic Herald who first published this article. It was written before the Pope’s encyclical Fratelli Tutti was published. The encyclical covers important themes about how we should care for those in need, including the elderly. 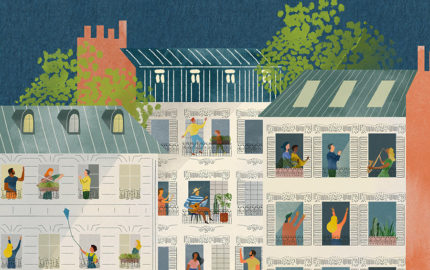 In early October, Pope Francis will sign a social encyclical on fraternity. It is an important topic. Too many statements from the Vatican have in recent years have strayed into political issues the subtleties of which are not always fully appreciated. And sometimes the points that are made are indistinguishable from the arguments of secular NGOs. Of course, the Church has something to say about such matters, and the media are always interested in what the Church says. And because the government is so dominant in modern economic and social life, it is difficult for the Church to avoid engagement with political issues. However, as is frequently pointed out in social encyclicals, the Church does not have economic and political models to offer, even if the light of faith can help us understand problems in these domains.

But the Church has something profound to say about fraternity. Perhaps a renewal of fraternity will help us see that some problems that we believe to be political problems that should be solved by government are really cultural problems that require change in behaviour and how we choose to live our own lives.

But the Church has something profound to say about fraternity. Perhaps a renewal of fraternity will help us see that some problems that we believe to be political problems that should be solved by government are really cultural problems that require change in behaviour and how we choose to live our own lives.

Almost every chapter of the gospels has something positive, and demanding, to say about fraternity. Love your neighbour as yourself; the parable of the good Samaritan; “whoever says he is in the light and hates is brother is still in darkness”; and so on.

And, though they are not the most commented upon aspects of social encyclicals, the messages within such documents about fraternity and clear and moving. In Caritas in Veritate it was stated: “The Christian faith, by becoming incarnate in cultures and at the same time transcending them, can help them grow in universal brotherhood and solidarity, for the advancement of global and community development.”

It is in this context that we should consider one of the greatest political problems of the modern age, a problem that has been highlighted by the covid-19 crisis. How should we provide and fund social care?

I first wrote about this problem in 1995 and it was a live policy issue at that time. The then Conservative government was seriously worried about the provision of long-term care for the elderly and was planning legislation which would have involved the state and those individuals who could afford it sharing the costs of long-term care rather than individuals with sufficient assets paying personally. The Conservatives then decided that this would cause more problems than it would solve.

The Blair government successively booted the issue into the long grass with a series of inquiries. The first was the Sutherland Royal Commission, led by a theologian, which proposed full state funding of nursing and personal care. This was rejected as too expensive with one Labour peer who was a member of the Commission writing in The Times that Sutherland was “a fine theologian and a decent man” but no economist and “made for a heaven where money grows on trees”.,

The coalition and Conservative governments from 2010 onwards have rejected any proposed policy change, including a proposal which led to a farcical general election campaign in 2017 and possibly the loss of a parliamentary majority by Theresa May. Boris Johnson has promised to solve the problem once and for all but is no further forward.

The covid crisis has been used by many as a way to throw more mud at the social care system. Even Boris Johnson blamed them for not following the right procedures. However, if anything, the 20,000 or more excess deaths in care homes is a failing of our healthcare system. Patients were discharged without testing into care homes and care home owners had their arms twisted to accept those patients. The disease then spread around many care homes like wildfire, not helped by the fact that they were often at the back of the queue for personal protective equipment.

And the longer-term, underlying problems with social care have not gone away. Social care is poorly integrated with the provision of healthcare.

And the longer-term, underlying problems with social care have not gone away. Social care is poorly integrated with the provision of healthcare. This is despite the fact that the ageing of the population makes the co-ordination and health and social care ever more important. Social care is incredibly expensive for those who have sufficient assets (normally a house). On the other hand, there is a perceived inequity between those whose care is financed by local authorities and those who have to pay themselves.

Nothing has changed since 1995. Governments still find that every proposed solution to the problems in the care system is a cure worse than the disease.

Students actually live rent-free in care homes and, in return, they give 30 hours a week free care to residents.

If we are short of political options, perhaps we should turn to a renewal of fraternity. It is not a coincidence that care homes, as well as hospices, in so many countries are run by religious orders. As vocations have declined, we need other ways for Christians to transform the care sector. Of course, this starts with families who should look after their elderly relatives to the maximum extent possible. Perhaps parish groups should redouble their efforts too. In some British universities and schools, there are volunteer schemes for students to assist in care homes, but in Holland they have gone one step further. Students actually live rent-free in care homes and, in return, they give 30 hours a week free care to residents. Both students and the elderly benefit hugely. The support the students provide, given their skills, is not the technical support they receive from qualified carers. It is more pastoral and educational in nature. It might involve teaching the elderly how to use computers or other skills. They help they give is of a more fraternal nature.