This is the first of two posts forming a tribute to Professor Gerald Grace who retired late last year. This post is an interview with Quentin Wodon who is a lead economist at the World Bank. (Click here for Part II of this post) 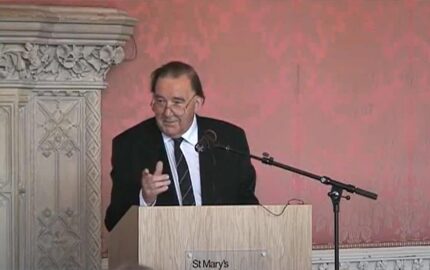 Part of Professor Grace’s influence came from the fact that he always encouraged research that could inform practice. He was a consummate scholar … and salesman, in particular to request contributions to International Studies in Catholic Education, a journal he created in 2009. As a small token of appreciation for Professor Grace’s contributions and his generosity towards others, a compilation from the Global Catholic Education project brings together 13 interviews about his work. This two-part blog reproduces an interview conducted with Professor Grace in 2019 (Part I) and shares snippets from interviews conducted over the last six months with a dozen of his friends and colleagues (Part II).

Interview with Professor Grace (conducted in 2019)

What motivated you to launch the academic journal, International Studies in Catholic Education?

I first tried to answer this question in the Preface and Mission Statement of the journal issue in ISCE Vol 1 No1 March 2009, 1-4 when we launched. In 2007 I had completed with the assistance of Professor Joseph O’Keefe, SJ, a large scale survey of Catholic Education research and evaluation in 35 countries across the world as reported by 60 researchers and analysts. The whole project took five years to complete and it was finally published by Springer, Dordrecht as International Handbook of Catholic Education: Challenges for school systems in the 21st Century42F[1] (IHCE). Part 1 reported chapters from North America and Latin America and from Europe (West and East). Part 2 reported chapters from Africa, the Middle East, Asia and Australasia.

These volumes were well received as the first ever international survey reporting research, scholarly and fieldwork studies of Catholic schooling in different countries and I received many invitations to discuss the findings at international conferences across the world. However, I realized that these texts had a number of serious limitations. The first was simply the price for the two hardback volumes i.e. about 500US$. This meant that they could only be purchased by academic libraries in small range of countries. They would have limited impact.

The second was that the whole survey had revealed that many of the Catholic Universities which I contacted for ‘research reports on Catholic schools’ had no research to report! I was shocked to learn this and, as Editor, had to ask them therefore to write about ‘what research on Catholic schools in your country should be done in the future?’. There was obviously a lack of interest and resource in many Catholic Universities about systematic research into the challenges facing Catholic primary and secondary schools in their own countries.

The third was that IHCE provided a survey valid as at 2007. How could the field of Catholic Education research and scholarship be updated after 2007? That was an important question to be considered.

I realized that the answer had to be the creation of the first ever international and interdisciplinary journal devoted to systematic research and scholarship in the field of Catholic Education Studies (CES) to deal with this challenge. Therefore, I launched the journal in 2009. I was motivated to do more than produce one survey in 2007 but also to generate a continuing flow of research and scholarship on an annual basis.

What have you learned from the articles published in the journal?

As an interdisciplinary journal devoted to the study of Catholic education, in all its forms across the world, I understood that this great educational mission would benefit from contributions from different disciplinary perspectives. We therefore welcomed articles from Theologians, Philosophers, Historians, Education Researchers (qualitative and quantitative), Social and Economic scientists, Natural scientists, School leaders and Teachers and member of Religious Congregations who had played a large part in establishing the mission across the world.

These contributions have come in practice from different intellectual cultures of analysis which can be comprehensively described ae research, scholarship, evaluation and personal reflective accounts. Today, empirical research is very powerful but other perspectives can also be illuminative. We need a catholic approach which includes interdisciplinary analysis.

You ask what I have learned from the articles published in ISCE between 2009 and 2019 and also those ready to be published in 2020. I give a summary answer: I have learned that Catholic educators have welcomed these articles and are using them to support their own work in different ways. The publishers (Routledge) have supplied us with data showing full text downloads of articles by year. When we began in 2009 there were just 354 but by 2014 this had risen to 6,353. In 2016 there were 8,727 and by 2018 it had reached 13,940 article downloads. This shows that the articles are having some impact and are providing a service values by schools, colleges, universities and Religious Congregations across the world. I invite your readers to submit articles for possible publication in future issues of ISCE.

To be the Editor of an international journal is to be located in a rich learning environment and I have learned much about Catholic Education by reading quality articles with different disciplinary modes of analysis. What is being constructed from all of these articles is nothing short of the creation of a new academic and professional field of International Catholic Education Studies. We need to involve scholars and researchers from Catholic and Secular universities and from International Agencies in this field of enquiry in the future, as well as school leaders and teachers acting in the role of ‘practitioner researchers’. University and school partnerships for research projects should be developed.

We now have 60+ countries accessing ISCE but the major contributors of articles are, at present, from the Developed World e.g. USA, UK, Australia and various European states. However, to try to compensate for this imbalance we have scheduled two special issues in 2020-2021- one focusing on Catholic education reports from Africa (guest editor Quentin Wodon) and one focusing on reports from Latin America (guest editor, Cristobal Madero, SJ).

What are the areas where you believe more research is needed?

(1)   Catholic Education and service for the Poor

The Catholic Church proclaimed the following mission commitment for Catholic Education internationally when it declared in 1977  that ‘First and foremost, the Church offers its educational service to the Poor’ (Congregation for Catholic Education, 1977, para 58)43F[2]. The Congregation went on to say that ‘If the Catholic School were to turn its attention exclusively or predominantly to those from the wealthier social classes, it could be contributing towards maintain their privileged position.

The world survey of the impact of Catholic Education reported in 2007, International Handbook of Catholic Education had shown that, in many countries, the commitment to education for the poor is not being realised effectively because of school budget problems. What I have called, ‘the strategic subsidy’ from the Congregations is declining. This is a major contradiction in the theory and practice of Catholic schooling worldwide and it needs much more research not only into why this is happening but, also, what new approaches in policy and practice can begin to change this situation, see for instance, Chile (Aristimuno 2020)44F[3]. We need to renew the mission integrity of Catholic education in its service for the poor.

(2)   The effectiveness of the spiritual, moral and social cultures of Catholic schools

The Catholic School document of 1977 proclaimed the Post -Vatican II ideals for the formation of students in these terms: ‘the Catholic School forms part of the saving mission of the Church especially for education in the Faith’ (para 9); ‘cultural pluralism leads the Church to affirm her mission of education to ensure strong character formation ….to foster truly Christian living and apostolic communities equipped in a spirit of cooperation to the building up of the secular society…to mobilize her educational resources in the face of the materialism, pragmatism and technocracy of contemporary society’ (para 12). In other words, Catholic schools are committed to forming young people in spiritual, moral and social ways, understanding the importance of working for the common good and for helping to build a better world. There are many research issues raised here.

To what extent are Catholic schools, in age preoccupied with measured test and examination results, also effective in religious and spiritual formation of the young and in the shaping of their characters in moral and social terms? More research with the adult alumni of such schools is needed to evaluate to what extent a Catholic education has lasting effects upon the spiritual, moral and social- occupational commitments of students later lives. The final assessment of effectiveness is shown in adult outcomes. As it is written, ‘by their fruits you will know them’!

(3)   The education and formation of Catholic school leaders and teachers

In the section of the Catholic School (1977), under the heading ‘the pastoral care of teachers’, the critical role of school leaders is recognized in these terms: ‘by their witness and their behavior teachers are of first importance to impart a distinctive character to Catholic schools. It is therefore indispensable to ensure their continuing formation through some form of suitable pastoral provision … also connected with the art of teaching in accordance with the principles of the Gospel’ (para 78).

This is a call for holistic personal and professional development which goes beyond technical updates for more effective subject teaching. There is reason to believe that such provision is largely neglected at present and we do need more research into pastoral and spiritual formation programmes for school leaders and teachers, as well as the programmes for increasing their knowledge of better learning and teaching methods. Catholic teachers should be person formers and not only knowledge and skills transmitters. They are shaping the citizens of the future.

What is spiritual capital and why is it important?

The concept of ‘Spiritual Capital’ I originated in my research report, Catholic Schools, Mission, Markets and Morality45F[4]. I had interviewed 60 Catholic headteachers working in challenging inner city Catholic secondary schools in London, Birmingham and Liverpool in the UK. Analyzing their responses to my research questions, I came to the conclusion that the majority of them were possessed by what can be called a ‘vocation’ or an ‘inner spiritual strength’ which sustained them in the day to day challenges of their work. They characteristically related their Catholic faith to their practice in schools.

As a background to my fieldwork, I had read the important work of the French social theorist Pierre Bourdieu46F[5] and his valuable analytical concepts of ‘Social capital’, ‘Cultural capital’ and ‘Religious capital’ however, my participants seemed to have a form of capital which was different from these and in the last chapter of my book I expressed this internal resource which they possessed as ‘Spiritual Capital’. This was not Bourdieu’s religious capital. I defined it as: ‘Resources of faith and values derived from commitment to a religious tradition’ (p. 236).

[3]Aristimuno, A. 2020. Challenges for Catholic Schools in Contemporary Uruguay, International Studies in Catholic Education 12(1): 51-61.
back to text

[6]Grace, G. 2010. Renewing Spiritual Capital: an urgent priority for the future of Catholic education internationally, International Studies in Catholic Education 2(2): 117-28.
back to text

Research in Service of Catholic Education – Part II: Interviews with Friends and Colleagues of Professor Grace

Can we eat, drink and be merry this Christmas?

Wealth in Scripture: Blessing or Burden?