Home » Articles » Ukraine and self defence in Christian teaching

The invasion of Ukraine by the Russian Federation has posed great challenges to Christian teaching about the waging of war and the insights of Catholic Social teaching, issues such as the immorality of an aggressive war, international relations and the welcoming of refugees. However these is one issue which is not met by a straightforward moral response: self-defence. 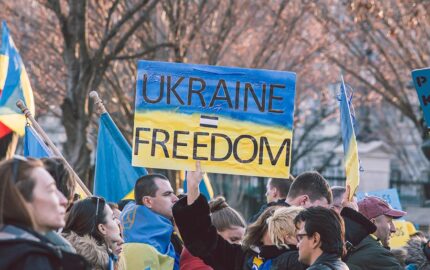 Christian tradition, by and large, has affirmed the right to self-defence.[1] Instinctively we want to applaud the courage of the Ukrainian armed forces and civilians; this right is also affirmed in the UN Charter and other international agreements. In the Catechism and the Compendium of the Social Doctrine of the Church this right is seen as a duty, linked to the obligation to protect the innocent. The Compendium commends those who serve[2] in armed forces in self-defence of their countries; in Ukraine and elsewhere members of armed forces see their role in these terms. The most eloquent spiritual assertion of this has been made by the Greek Catholic Major Archbishop in Ukraine.[3]

However, the Christian tradition does not see it is as an absolute right. The Just War tradition (which many, including Pope Francis in Fratelli Tutti, believe may no longer be appropriate) treats the right to self-defence in the same way as any recourse to arms. One of the conditions which has to be met, as the Catechism puts it, is that ‘there must be serious prospects of success.’[4] Along with other criteria (such as recourse being a last resort) this is strict condition, and it qualifies significantly the right to self-defence; at the very least we should be careful about language which portrays the right as ‘God-given’. In the Second World War, we can apply this principle to some situations where governments threatened or invaded by the Third Reich decided not to resist – Denmark, for example – as resistance would have been futile.[5] While we might instinctively admire other countries who reacted differently, it is clear that the Danish government’s decision was in line with traditional Christian teaching. So in Ukraine we want to be able to support and defend the men, women and children who are victims of cruelty and violence; moreover this wish accords with much of how we have been brought up in terms of our own history, particularly with regard to the Second World War. But, if we are honest, our teachings should make us hesitate. For, on the face of it, Ukraine faces an overwhelming superior military force in Russia. Is not resistance futile? Moreover the other Just War principle comes into play as well: are the civilian casualties already suffered proportionate to the aims of preserving national independence, of defending people’s right to live in a democracy? Even asking these questions is likely to offend and anger those whom we want to support.

The sad irony may be that the bombardment of civilian targets in cities, a serious moral crime, has been the result of the success the Ukrainians had in holding up the advance of Russian land forces.

What makes this complicated is that the futility argument here is complex; any ‘prudential judgment’ needs to be made carefully. The reason is that, in spite of Russia’s military superiority, the resistance since 24 February has been far from futile and impeded the Russian advance far more than was expected, certainly by the Russians: it seems that (as in Crimea in 2014) the Putin government expected a quick victory; arguably they needed this. The sad irony may be that the bombardment of civilian targets in cities, a serious moral crime, has been the result of the success the Ukrainians had in holding up the advance of Russian land forces. It was much easier to claim that there was ‘no serious prospects of success’ at the beginning of this invasion than it is now.[6]

It seems therefore that in terms of traditional teaching the issue is not entirely clear: for some of us this is an uncomfortable position, but it is important to be honest. Here are some of the problems:

(i) As indicated above, success in resistance can actually lead to greater civilian casualties, and it looks as if this is what is happening;

(ii) What, both for the Ukrainians and the Russians, constitutes ‘success’ in this war? For the Russian government, at the time of writing (10th March) this would appear to be recognition of earlier gains, autonomy for the eastern regions and a constitutional guarantee that Ukraine will not join NATO and the EU (some would argue they want more than this, such as regime change). For the Ukrainians it is actually much less clear: the Russians not achieving these aims? The Russians returning Crimea? Survival as a nation state? A cease fire before negotiations?

(iii) How far is this prudential judgment about success affected by the actions of NATO and others, by on the one hand supplying some military supplies to Ukraine and on the other by sanctions and other actions against the Russian government and its supporters? If we are bolstering up what may be in the long term futile Ukrainian resistance while refusing to fight ourselves, are we acting morally?

While uncertainty, even if it is commendable to admit it, is unsettling for many – particularly if others ask us for guidance – it also has to affect our conduct. It really demands care and caution; if we are uncertain it is surely irresponsible to say ‘As the teaching isn’t clear, I am free to do what I like and back the Ukrainians in their resistance.’ Lack of clarity in moral terms is not the mother of recklessness, or even courage – but rather of caution, particularly if continued resistance leads to more and more civilian casualties. You can only ask someone to risk their lives, or take another’s life, if you are morally certain that this is the right thing to do. The need for a prudential judgment is precisely why self-defence is not an absolute right.

For this reason I think many were uneasy when The Tablet reported last weekend that, at the celebration of the Divine Liturgy in the Ukrainian cathedral in London, there were a lot of collecting boxes for money to buy weapons[7]. Now for Christians who are absolute pacifists (such as the Catholic Worker movement) the issue is clear, if painful; for others it is more nuanced because we have to make a prudential judgment about whether something is in the long term futile or not. Incidentally the Church’s teaching documents affirm the value of the pacifist position and insists that the rights of conscientious objectors are protected.

To sum up, I think this question is at least for me undecided and not entirely clear at the moment; this means we should be very cautious about encouraging the Ukrainians to fight back; such caution would be in line with the pope’s teaching in Fratelli Tutti. This is, if we are honest, a qualification of our support for the Ukrainians and will be seen as unsupportive. It is not intended to be. It is a recognition of the complexity of these issues and of making, in practice, the prudential judgements that are involved.

[1] The main source here is Compendium of the Social Doctrine of the Church 500ff.

[2] So the Holy Father says in footnote 258 (to section 242): ‘Saint Augustine, who forged a concept of “just war” that we no longer uphold in our own day, also said that “it is a higher glory still to stay war itself with a word, than to slay men with the sword, and to procure or maintain peace by peace, not by war” ‘ (Epistola 229, 2: PL 33, 1020). In the text of the letter the pope warns, in talking of the criteria which can justify armed force, ‘against an overly broad interpretation of this potential right’.

[5] The land mass of Denmark, Jutland in particular, would have been very easy for the German army to occupy quickly. Only a small number of Danes were sympathetic to the Nazis and the country’s action was not led by any sympathy for Germany, with a difficult history going back to the 1860s.

[6] Another analogy from the Second World War is perhaps instructive: the ‘Winter War’ from 1939 to 1940, between Finland and the Soviet Union. The Finns resisted with far more success initially than anyone expected, and the Soviet forces sustained far greater casualties. Nevertheless in the end Finland had to sue for peace and accept humiliating terms. Karelia is still part of the Russian Federation.

The NHS – an article of faith