Earlier this year, we commemorated the one hundredth anniversary of the birth of Karol Wojtyla, Pope John Paul II. A multitude of articles, conferences and events has marked the date but perhaps the best way to recall John Paul II is through the authorised biography produced by George Weigel titled “Witness to Hope” and first published in 1999. 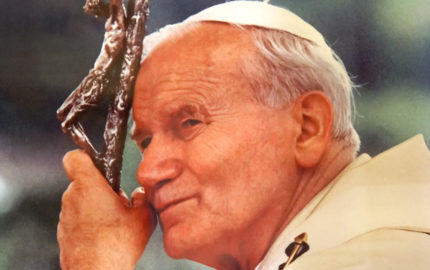 George Weigel continues to be one of the most prestigious Catholic public intellectuals in the United States today (and is also a great friend of Portugal, a country he visited several times at the invitation of the Institute for Political Studies of the Catholic University of Portugal). Weigel has always presented himself as an admirer of the Council Vatican II and as a disciple of the liberal Catholic tradition that takes authors such as Lord Acton and Alexis de Tocqueville as a reference. For the surprise of some, Weigel was also a declared admirer of John Paul II and of his pontificate.

John Paul II authorized Weigel to have access to all documents and testimonies that he deemed necessary to prepare the biography – defined as ‘authorised’ but not as ‘official’. The Pope had frequent conversations with Weigel throughout the preparation of the book – but preferred not to read the biography before its publication. It is therefore an independent work, even if coming from a profound admirer of John Paul II.

Weigel argues that John Paul II completed that which Sir Michael Howard, the influential Professor of Modern History at Oxford, called the ‘great revolution of the twentieth century’: re-uniting the Catholic Church with the causes of democracy and human rights.

Weigel argues that John Paul II completed that which Sir Michael Howard, the influential Professor of Modern History at Oxford, called the ‘great revolution of the twentieth century’: re-uniting the Catholic Church with the causes of democracy and human rights.

In political terms, this reunion not only contributed to the fall of the Berlin Wall and of the communist dictatorships of Central and Eastern Europe – it also made a decisive contribution to the success of the ‘Third Wave’ of democratisation – a wave that took place mostly in Catholic countries and the beginning of which Samuel P. Huntington attributes the April 25th 1974 revolution in Portugal.

George Weigel argues that John Paul II developed Catholic Social thought in a profoundly anti-authoritarian direction – in opposition to all unlimited political power, regardless of its ideological quadrant. Weigel’s passages stressing the crucial importance for John Paul II’s thought of pluralism, subsidiarity, separation of state and Church and the condemnation of all sorts of sacralisation of political power are particularly impressive.

Weigel recalls another crucial area of convergence between John Paul II and key liberal authors in the twentieth century such as Karl Popper, Isaiah Berlin and Raymond Aron: the idea that a dogmatic belief in ‘Reason’ – and the refusal of the dialogue between Faith and Reason – has produced what Aron designated ‘opium of the intellectuals’, what Popper called ‘dogmatic rationalism’ and what Berlin named ‘rationalistic monism’.

One of the political expressions of that dogmatic rationalism has manifested itself since the 18th century in governmental attempts to expel religion from the public square. Quoting Edmund Burke, Lord Acton and Alexis de Tocqueville, Weigel notes that this version of ‘anti-religious liberalism’ did not achieve significant expression in the English language political culture. But he also stressed, quoting John Paul II, that a new version of rationalistic monism was emerging in the West, including amongst the English language peoples: the spiritual exhaustion of modern societies.

Karl Popper had curiously identified this emergence of a nihilistic relativism as a result of what he designated ‘disappointed dogmatic rationalism’: from the blind trust in the ‘certainty’ of reason, dogmatic rationalism transitioned to the blind certainty in the impotence of reason. George Weigel emphatically recalls John Paul II’s critique of the excesses of rationalism and his warnings that these excesses were leading to nihilistic relativism. Modern man will only be able to reencounter the moral resources to control the downward pressure if he is able to restore the dialogue between Faith and Reason.

In the context of contemporary Catholic social thought, John Paul II was a living testimony of that hope in the possibility of restoring the dignity of the human person through an open dialogue between Faith and Reason, in the always unending search for the True, the Good and the Beautiful.

An earlier Portuguese version of this text was published at Observador [https://observador.pt/], May 18, 2020