In the late 1970s I lived in rooms in Oriel College, Oxford, a few metres from the infamous statue of Cecil Rhodes in the city’s High Street. I don’t recall the statue, or the smaller ones also on the wall (including Cardinal William Allen) ever being discussed. Rhodes was only at Oriel for one term in 1873, leaving a lot of money to the college and to the university, partly for the scholarships bearing his name. What does Catholic Social Teaching have to say about the statue’s future, and that of similar monuments? 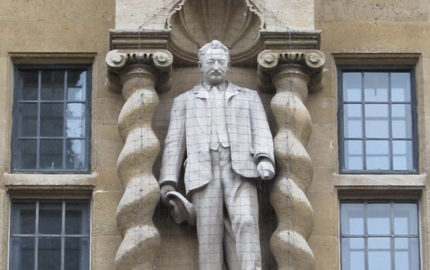 Different monuments are the responsibility of different bodies. This statue is not owned by Oxford University or any public body but of Oriel College, which has a rich Christian heritage. Catholic teaching affirms the right to private property, but this is not seen as an absolute right[1]: it has a ‘social obligation.’ Sometimes in the public interest governments will confiscate private property, and at the very least the qualified nature of the right obliges owners to take account of wider issues in the community relating to their property. Are those  angry about a particular monument justified in taking the law into their own hands to bring it down? I think our moral tradition would affirm that like breaking the law in other respects it can be justified if this is proportionate and a last resort (as could be argued in Bristol over Edward Colston’s statue, because the issue had been around for so long; few would shed tears for Felix Dzerzhinsky’s statue in Moscow toppled in 1990). Now the Provost and Fellows of Oriel, in response to the demonstrations and campaign, have changed their decision of four years ago and have decided to remove it and have set up a commission to look at issues surrounding the statue.[2]

They have surely done this after a long process of reflection, correctly respecting the qualified nature of their rights in relation to their property. Educational institutions do not exist in a vacuum: they are part of society and try to be alert to the ‘signs of the times’. There are three reasons why this is important.

First, the campaigning of groups like Black Lives Matter and Rhodes Must Fall are about a reappraisal and reviewing of history, in this case colonial history, important influences in the British Empire and the history of South Africa, Zimbabwe and Zambia. Colleges like Oriel take history seriously – and Oriel has a fine reputation in the subject[3]. Every generation rewrites history, as new facts come to light and as perceptions of the events of history develop: this is why it’s so strange that opponents of what Oriel has done accuse the college, along with BLM, of wanting to ‘rewrite history’? When have we not done this? In Catholic teaching history is important, which is why you have to study even a little Church history if you want to be ordained: indeed rewriting English Christian history is particularly important for Catholics: what did Eamon Duffy do in The Stripping of the Altars? Historical enquiry, like theology, is a search for truth. Rewriting history, removing statues is expunging a record – but of correcting it to deepen our own understanding of history. Also, it is surely responsible to ask whether the money which paid for a statue was obtained justly: if not, the case for removal is strengthened.

…Catholic teaching sees racism as gravely sinful… It is not simply a question of being uncharitable when we discriminate against someone: we are denying the other person’s innate dignity as a human person created in God’s image.

Secondly all Oxford colleges in Oxford are painfully aware that the university has far fewer Black and Ethnic Minority students than it ought to. So university authorities should listen to the few BAME students, researcher and dons that is has, to accounts of what it is like to be a Black person in the university, to BAME students for whom statues of people like Rhodes  are offensive not because these students are easily offended, but because of the actions and beliefs of people like Rhodes. Such a process of listening, of heeding to voices which have not been heard, is important for Catholics, and has characterised in particular the ministry of Pope Francis.

Finally, Catholic teaching sees racism as gravely sinful[4]. It is surely an example of what St John Paull II dubbed as ‘structural sins’. It is not simply a question of being uncharitable when we discriminate against someone: we are denying the other person’s innate dignity as a human person created in God’s image. It is really a denial of our theology of creation, a denial of God, an act of blasphemy. Communities can be inherently racist in a way which demands challenge and conversion, also required of individual perpetrators. Now most people in 1911, when the statue was erected, had attitudes very different from our own (though even then Rhodes’ views were seen as extreme by some: he thought that the Anglo-Saxon race was the ‘first’ in the world and that ‘natives’ should be treated as children): moreover the statue appears to celebrate the whole of his life.[5] This qualifies how we judge past generations, but it does not make history ‘morality-free.’ Sin has an objective character. We grow and develop in our understanding of ethical norms and human behaviour: conditioning can limit someone’s culpability, but it does not allow us to dismiss the sin. In the recent weeks of the Black Lives Matter demonstrations death, the Catholic Church, led by the pope, has gone out of its way to draw attention to the grave problem of racism [6]. Moreover, since at least the time of St John XXIII, the Church has also affirmed and supported the end of colonialism, of all that Rhodes stood for and believed in[7].

We should recognise that the trust which runs the scholarships has been changed substantially since Rhodes’ bequest: they are a force for good in the world. Oriel is not proposing the statue’s destruction, but simply its removal: the heirs of St John Henry Newman have acted responsibly, after some years of debate, and in line with Catholic Social Teaching and the Catholic approach to history.

[2] For the statement of 17 June 2020 from the governing body, see https://www.oriel.ox.ac.uk/about-college/news-events/news/statement-governing-body-oriel-college.

[4] Compendium of the Social Doctrine of the Church 433, drawing on the Second Vatican Council, Nostra Aetate, St John XXIII Pacem in Terris, and St Paul VI Populorum Progressio. Another important source is Pontifical Council for Justice and Peace The Church and Racism (2001).

[5] I am grateful to Professor Philip Booth for pointing out a distinction between honouring someone for a good act, and honouring the whole of that person’s life.

[6] See, for example, the recent message to young people of the Archdiocese of Southwark, www.rcsouthwark.co.uk/media/No_Place_for_Racism-17_June_2020.pdf.