One of St. Mary’s University’s core values is “generosity of spirit”. In this post, Francis Davis reminds us that we should take those with whom we disagree seriously rather than dismiss them. That way, we might all grow in knowledge and wisdom. 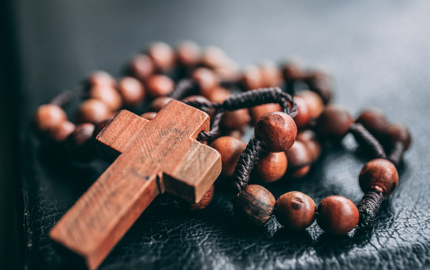 The eminent commentator Clifford Longley was on strident form the other day. Writing in The Tablet he launched a blistering attack on the biographer of John Paul II, George Weigel. Weigel. It seems he has been guilty of displaying ‘pick and mix’ Catholicism because, according to Longley, while he is strong on resistance to abortion, homosexuality and contraception, he is weak in his advocacy of Pope Francis, and lukewarm in his endorsement of certain of the Papal social encyclicals.

Longley though has got Weigel and the form of Catholicism he represents deeply wrong.  In this failure he is in very good but confused company alongside former Dominican Master Timothy Radcliffe in What Is the Point of Being A Christian and journalist Austen Ivereigh in his recent book Wounded Shepherd.

Buried deep in Weigel’s voluminous output is a 1995 essay which is critically important to understanding his particular zeal and that of others who share his account of holiness. In a nuanced collection, edited by the University of Notre Dame’s Professor Scott Appleby entitled Being Right: Conservative Catholics in America, Weigel powerfully expresses his enthusiasm for the Second Vatican Council but not in terms that those pre-conditioned by English and wider European debates regarding welfare states or liturgy easily grasp.

Weigel explicitly explains that he is not a Traditionalist. Quite the reverse he celebrates the Council’s affirmation of the lay vocation and the potential it offers for renewal and mission for American Catholicism especially.

Weigel explicitly explains that he is not a Traditionalist. Quite the reverse he celebrates the Council’s affirmation of the lay vocation and the potential it offers for renewal and mission for American Catholicism especially. Within this frame, he proposes, America’s great contribution to the Council’s teaching was ‘freedom’ and especially freedom of belief. This was particularly undergirded by the theological work at that time of a Jesuit, John Courtenay Murray. What flows from this inspiration, in Weigel’s view, is the opportunity to celebrate America’s exceptional social, economic and democratic achievements and the moral groundedness that he sees in something akin to what Michael Novak had earlier called ‘the spirit of democratic capitalism’. From the heart of the Council’s embrace of religious liberty then emerges a passionate advocacy of a distinctively American Catholic moral ethic among whose certainties are the failure of kleptocratic bureaucracies, the exhaustion of European colonialism and the judgment that America’s empirical progress has something to offer the world.

To register the consistency in this position analytically one needs to note that Weigel and colleagues have spent close to thirty summers since the fall of the Berlin Wall running a special seminar in Krakow for young and emerging leaders focused on ‘the free society’. One meets his alumni in increasingly senior roles right across Eastern Europe. As if to reaffirm the post conciliar renewal he espouses, in 2009 Weigel actively opposed the re-readmission of the ultra-Traditionalist Lefebvrists into the Church on the grounds that they continued to oppose religious liberty and freedom of conscience.

Weigel and friends have also gathered likeminded influencers around them and these not only meet annually for high powered fellowship but in recent times have put their money where their mouth is by endowing a new business school in their image at the episcopally governed Catholic University of America. Some have even been sighted supporting St Benet’s Hall in the University of Oxford.

That Europeans such as Longley, Radcliffe and Ivereigh find this form of celebration of ‘freedom’ perplexing would not surprise Weigel. He has long argued that the UK and its neighbours have lost their social optimism, let their birth rates plummet, decimated their family resilience and so no longer have the spiritual and people resources – not least of an enthusiastic America rising – to renew the Church and the society around them. Michael Novak before him would come to the UK and debate with the late Bishop John Jukes suggesting that Jukes had confused statism with alternative strategies as the only ‘moral’ means by which to undermine injustice.

Meanwhile, that Weigel rejects the policy recommendations in the social encyclical Populorum Progressio is neither here nor there: it is, after all, drenched in theories of ‘modernisation’ in development economics long ago discredited in academic social science by those of every political complexion (just as the second half of Centisumus Annus was touched by neo-liberalism just after its excesses were clearly apparent most notable in policy options adopted at that time by the IMF and World Bank). In any case, as the UK’s leading authority on Catholic social teaching in the 20th century, Rodger Charles, stated: the magisterial authority of the encyclicals extends to matters of moral principle and their implications only. On those matters, it is binding on the conscience of members of the Church. Practical and other related matters, according to Charles, can be judged on the basis of the arguments presented

The question might better be put then as to why a Latin American, European or North American contextual theology ought to be adopted in a universal church ahead of an African, Australasian or East Asian one?

No, if there is a gap or conundrum in Weigel’s outlook it may be found in the reality that for all of the enthusiasm of its advocates it is by its own admission clearly what others would describe as a ‘contextual theology’. It is a clear American reflection on the Council through an American ‘modern’ (in the philosophical sense) paradigm. In turn this may explain why the associated movement of ‘Catholic Evangelicalism’ is so over weighted towards criteria related to ‘belief’ and a methodological individualism.

Ironically in this challenge he shares that practical conundrum with Pope Francis. The Holy Father too shapes his pastoral choices by reference to his own equally contextual response to the Council. His personal theology has whiffs of Peronism about it, his advocacy of a ‘Patria Grande’ for South America not without its local critics. Indeed one can read the documents he drafted for resolution by the Latin American Bishops’ Conference, particularly at Apericida in 2007, as an apogee of this outlook.

What Longley effectively calls ‘heresy’ then flows from deep theological reflection and a context just as the Holy Father’s world view does. The question might better be put then as to why a Latin American, European or North American contextual theology ought to be adopted in a universal church ahead of an African, Australasian or East Asian one? Rwanda has stunning insights to share with the world from its work in reducing child mortality. The Capuchins in Angola have pioneered self-help in elderly care. Moreover, for all their challenges the Peoples’ Republic of China, the Republic of China, South Korea and Singapore have lifted more people out of poverty in the last 60 years than the US and in some cases with far more creative policy frameworks to support neighbour, family and social solidarity than other nations.

This may be where a fruitful dialogue could emerge between Europeans such as Longley, Weigel and his allies and the emerging powerful minds and innovators of Africa and Asia East and South.

In the end the choice is not between ‘US neo-cons’, Europeans and Papal priorities but between the relevance of contextual theologies and what universality truly means. It is about making transparent the starkly contrasting consequences of the adoption of any.

For if, even while denied, contextual theology is to be all the rage how will the fresh voices of Europe to the East, Africa, and Asia in future deal with the superiority complexes of the Churches of both Europe and America and in turn add ever richer ingredients to the pot that the current debates have brought into play? And how comfortable will the Church as a whole be if such contextual approaches gives rise to a global community as diverse as the markets, civil societies, firms and states and cultures in which they serve.

The risk here is not that Weigel or Longley or anyone else are successfully identified (or abused) as, Anglo, renegade, pick and mix, ‘Lite’, Euro, Brit or ‘heretical’ Catholics. Rather it is that talented people, by not taking the time to really take each other seriously, and by not doing the heavy lifting to see how much energy and renewal is already in play globally, end up seeking to export ‘contextual’ theologies that are as irrelevant to the Church as a whole as Weigel might find the German social insurance, Church tax, and social partnership state and Longley might judge the vast scale of government spending on the US military.

In the end the choice is not between ‘US neo-cons’, Europeans and Papal priorities but between the relevance of contextual theologies and what universality truly means. It is about making transparent the starkly contrasting consequences of the adoption of any.

For if contextualisation is the order of the future we best get used to a culture of ferocious debate and dissension and look to find better theological skills to upskill those debates. If it is not the order of the future then we need new voices – urgently – to refashion a much richer and sustainable Catholic social ethic for our times.